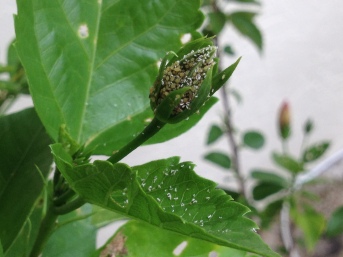 Aphids! BAH!  I’m sure that almost every gardener, no matter the size of the garden or the experience level of the gardener, can feel my pain.  Earlier this spring, I lost nearly all of my plants to these little devils.  I had beautiful straight eight cucumbers blossoming and within days they were completely destroyed.  My green beans suffered the same fate.  My hibiscus was so infested I decided I had no other option but to basically cut the infested branches off and dispose of them far, far away from my dying garden.  Now please remember that I am still a novice gardener, so I didn’t immediately recognize the signs during the first attack.  This is part of the reason why I couldn’t save most of my plants the first time around.

Once I finally did realize what was going on, I decided that because my plants are meant for food consumption, I did not want to use any heavy duty pesticides.  I stay away from everything with pyrethrins, not only because of the tortoises consuming the plants, but also because I have cats.  My days as a vet tech have completely turned me off to all things pyrethrins.  Though pyrethrins are used in many flea and tick preventatives, they can be extremely dangerous, especially to cats, causing tremors, grand mal seizures, and in extreme cases, death.  Having spent most of my vet tech-ing days in emergency animal hospitals, I have unfortunately had to witness cats (and even some dogs) having adverse reactions to this poison and it’s heartbreaking to say the least.  Unknowing pet owners are trying to do right by their pets and end up causing severe harm.  So, I don’t want to even present an opportunity for my cats to be exposed to anything containing pyrethrins. Moreover, pyrethrins are highly toxic to bees.  I specifically planted certain flowers in the garden to attract bees.  I’m certainly not going to spray something that’s going to kill them.

I wanted to keep it natural.  A friend suggested using neem oil.  I gave it a try on the plants that had been completely infested.  I shamefully admit that I did not read all of the directions.  I went about spraying neem oil on everything, including my hibiscus.  The following day, by the time I came home from work, the hibiscus looked like a few sad little sticks.  All of the leaves had shriveled and fallen off.  Had I read all of the directions, I would’ve read the part about not using neem oil on certain plants like hibiscus (way to kill your plant dumbass!).  Additionally, I was apparently a little heavy handed with the neem oil on the rest of the plants too.  So not only did I have a hibiscus that was rather reminiscent of Charlie Brown’s Christmas tree, I also had a bunch of other half eaten, half burned plants.  In a nutshell, it was an epic gardening fail.

Brown snail making its way toward my greens

I had to dispose of everything except some chicory, which might I say, is one hearty little green.  I also decided to keep the hibiscus and hope for the best.  Believe it or not, the hibiscus actually survived and eventually began providing the tortoises with some pretty tasty snacks.  I also planted lots of new crops which started out with a bang.  And then all of a sudden, those nasty little critters appeared again and this time they brought reinforcements – SNAILS!  UGH!!

What’s an inexperienced gardener to do?!?  Luckily, I caught the attack much earlier this time, but having the two armies unite against me was more than my poor plants could bear.  Armed with my neem oil (with ALL directions read) and a lighter spraying hand, I went on the defensive again.  I caught the infestation much earlier this time around and my counterattack seemed to have some effect on the aphids, but not as much as I would’ve liked.  And I still had those pesky little snails to deal with.  So I took to the internet to do some research.

I found all kinds of information on beneficial insects to address the aphid problem.  I also found some natural remedy suggestions for the snails.  As far as the beneficial insects went, I read that the larvae of lacewings and ladybugs are actually the most voracious.  So I ordered some lacewing larvae online and when I received them, I read the directions (all of them) and placed them in my garden to go to war.  Much to my disappointment the larvae thing didn’t work.  By the next day, I couldn’t spot a single larva on any of the plants.  I did, however, see a bunch of ants.  Now, I’m not really schooled in the way of entomology so I really have no clue if the lacewing larvae disappearance was a coincidence or if the ants were behind the whole thing.  And as for the snails, I opened up a bottle of beer, poured a couple pans full, and strategically placed them in the infested areas as suggested.  Apparently the snails in my garden do not have a taste for brown ales.  So after days of trying unsuccessful remedies, my garden was once again on the brink of extinction.  I reluctantly resorted to an organic snail and slug repellant which worked well.  The aphids eventually left once their meal ticket was gone.  And the battle was lost.

Now, I’m not really sure if I’m optimistically persistent or just insane, but I decided to try my hand at gardening again.  I planted more seeds, cut off more braches, and kept a vigilant watch for the first sign of any unwanted guests.  This brings us to my current situation.  Those scheming little monsters are back again!  This time I spotted them quickly.  As soon as I spotted them, I started spraying neem oil again.  I didn’t spray as heavily, but I made sure to spray each and every leaf of my cucumbers, both top and bottom.  The first round went to me this time!  When I checked my plants the following day, almost all of them were dead!  For those few that survived, I shot some more neem oil on them for good measure.

Some of the dead aphids on a cucumber leaf

For the most part they seem to be kept at bay right now.  Unfortunately, we are getting the typical daily South Florida summer rain showers, so I’ve been lightly spraying every day or two just to make sure they don’t think I’m slacking off or something.  Additionally, since I built the raised garden bed, I haven’t spotted any snails.  I’m not sure if it’s because they can’t get to the plants or if it has something to do with the linseed oil I treated the wood with or if it’s entirely coincidental.  But whatever the reason, I’m certainly not complaining.  This war is a constant one for which I will have to continue to try different plans of attack.  I’d like to give the beneficial insects a try again.  I’ve planted some flowers with the hope of attracting some to the garden so that I don’t have to buy any more.  I have a bunch of reptiles and amphibians in my house, so I have enough bugs to buy already (for food).  I don’t need to add ladybugs and lacewings to the list too!  At this point, I’ll just have to see how it goes.  For those of you having the same troubles, stay strong and keep gardening!!!

2 thoughts on “Aphids: The Bane of My Garden’s Existence”